My children’s school has a wing endowed in the name of Lynette Phillips. I had never questioned the legacy of this Lynette. Regularly I walked by this wing and noted the sign and thought fleetingly what a lovely way this was to commemorate someone. The school I attended also featured a tribute to Lynette, but that too I never questioned.

It was only when someone handed me this book that I realised that the Lynette Phillips whose name graces my children’s school was actually the daughter of Millie Phillips, one of the most generous philanthropists that the Sydney Jewish community has ever known.

There are two ways to approach a review of this book – from a literary perspective and from a narrative perspective. Rather than critique the literary qualities of Millie’s book, I’m going to focus on the narrative because I was so taken by the story that it seems worth discussing.

After reading this book it is impossible to deny that Millie Phillips is a strong, committed and driven woman. Her story is fraught with incredible trials and tribulations, and with abuse and trauma. On the one hand, Millie is a business woman, building an empire, but behind closed doors she seems to be powerless to battle her abusive husband and dysfunctional family. How she reconciled these two realms is hard to fathom. But clearly she did because in one sense she triumphed – she survived.

What didn’t survive was Millie’s relationship with her children and in fact the book itself is a kind of love story, a testimony to the depth of her connection with one of those children, Lynette, who joined a cult and self-immolated at the age of 24. Parts of this memoir read like an elegy to Lynette and the enormous loss that Millie suffered when she died.

There is so much complexity in this memoir that it is difficult to explain – it is hard not to be in awe of all that Millie accomplished and the grandiosity of her vision about everything she attempted – nursing homes, mines, life itself. At the same time, it is impossible not to feel her sorrow.

What has stayed with me is that Millie Phillips is a woman from whom one could learn a great deal, a woman I would quite like to meet but never cross.

For those of you planning to read this memoir, one word of warning: to me it seemed that this book was written by two different people. The first part is quite simply magnificent and captivated me entirely, drawing me in to the narrative and the emotion of the telling. It is eloquent and brilliant. The second part lacks this quality. I read it nonetheless, but I couldn’t help thinking that there were two voices speaking here – three if we count Lynette. My advice: read the first part and love it and love Millie for all she represents for women in our age and then stop and read something else. 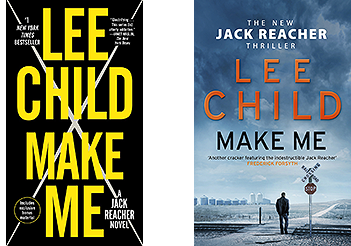 Nothing is better than a cold and rainy day, a cup of hot tea and a Jack Reacher tale. There is something about Lee Child’s protagonist that is so incredibly appealing – The Washington Post calls him “the stuff of myth…. One of this century’s most original, tantalising pop-fiction heroes” and I couldn’t agree more. Jack Reacher represents the great unknown. He is a wanderer, a nomad, travelling with only the clothes on his back from town to town, stopping wherever he feels the need. He is astute, curious, a keen observer and endearingly fearless. But I think that what makes Reachers such a fascinating character is the deep sense of aloneness that travels with him. He really is a solitary figure and even when he connects with other characters, he still maintains this aura of isolation.

Like all of Lee Child’s thrillers, this one is fast paced, racing through the action, filled with twists and unexplained clues. It’s 262 pages are weightless, making this the perfect book for a long flight or a summer holiday.

For those of you, like me, who are Lee Child fans, this book won’t disappoint!