The Unchosen: The Hidden Lives of Hasidic Rebels, Hella Winston 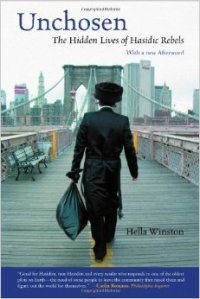 I love a book with a good subheading and this one certainly didn’t disappoint – “The Hidden Lives of Hasidic Rebels”. It’s a tantalising prospect … that there are rebels in this sect who retain their Hasidic identity but in the privacy of their homes or behind closed doors, they engage in activities which would certainly have them excommunicated.

I quite like the way this book was structured; a series of interviews cobbled together with the invested narrator guiding the drama, involved in its outcome, hovering always on the edge. We came to understand these ‘rebels’ and to watch them voyeuristically from a distance, feel their distress but never quite ‘know’ them … if that makes sense. I think this is a consequence of Winston’s style – the book started off as a doctoral thesis and then evolved into this act of expressive witnessing.

What Winston does extremely well in this book is provide us with these varied insights into the challenges of living in a strictly limited and perhaps limiting society where one so desperately wants to belong but can’t fit into the mould. Winston’s characters are all tortured and tormented by this struggle and there is a constant sadness that underlies their journeys. I quite like the empathy that Winston shows for these individuals that she meets, despite the fact that she comes from such a different background to them and that she really can’t appreciate most of the obstacles that they are facing. I think that this lends the book an element of honesty which seals it as a valuable book to read for anyone interested in Jewish identity, Jewish culture or Jewish society.

It’s certainly not the best book that I have read on this topic, although perhaps I am grossly influenced by having just read Joseph Berger’s stellar tome called The Pious Ones. But I am glad that I read it and it has contributed enormously to my perception of Hasidic Jews and the way that they live.

Despite the moments of extreme discomfort involved in reading this book, I quite enjoyed parts of the novel, particularly some of the humour. This is a book filled to the brim with a wonderful sense of familial awareness, of guilt brought on by parental expectations and of the anxiety that comes with any coming of age story. Alexander Portnoy is the protagonist and the book is narrated as an unburdening to his therapist. As a consequence, the story unfolds in a colloquial, chatty style with constant references to the Doctor who is supposedly listening.

But the book is actually more about ‘not listening’ than it is about ‘listening’ and/or hearing. It describes Portnoy’s desire to be anyone other than himself, to absolve himself of what he sees as his overbearing mother (“She was so deeply imbedded in my consciousness that for the first year of school I seem to have believed that each of my teachers was my mother in disguise.”), his embarrassing family and the antiquated rituals which he thinks smother his ability to express himself. His family are clearly all incapable to actually communicating with each other in any sort of meaningful way, and Portnoy has successfully deluded himself into thinking that he can find meaning by focusing solely on his penis and its performance (or lack their of).

Portnoy’s relationship with his mother is, on the surface, the one constant in this text. He is her only son, one of two children, the light of her life and the bearer of all her dreams and expectations:

“My own mother, let me remind you, when I returned this past summer from adventure in Europe, greets me over the phone with the following salutation: ‘Well, how’s my lover?’Her lover she calls me, while her husband is listening on the other extension! And it never occurs to her, if I’m her lover, who is he, the schmegeggy she lives with? No, you don’t have to go digging where these people are concerned – they wear the old unconscious on their sleeves!”

Portnoy’s father, on the other hand, is a downtrodden man whose head aches all the time and who suffers from constant constipation. This is ironically explained in stark juxtaposition to Portnoy’s own ability to constantly (and I mean CONSTANTLY and UBIQUITOUSLY) “express” himself penilely.

Portnoy describes his father as intellectually inferior, stuck in the rut of his life, and incapable of expressing himself:

“Where he had been imprisoned, I would fly: that was his dream. Mine was its corollary: in my liberation would be his – from ignorance, from exploitation, from anonymity. To this day our destinies remain scrambled together in my imagination, and there are still too many times when, upon reading in some book a passage that impresses me with its logic or its wisdom, instantly, involuntarily, I think, ‘If only he could read this. Yes! Read, and understand -!’”

He shares with the readers, in quiet confidences, his disappointments about his father:

“My father, you must understand – as doubtless you do: blackmailers account for a substantial part of the human community, and, I would imagine, of your clientele – my father has been ‘going’ for this tumor test for nearly as long as I can remember. Why his head aches him all the time is, of course, because he is constipated all the time – why he is constipated all the time is because ownership of his intestinal tract is in the hands of the form of Worry, Fear & Frustration.”

His constant and ongoing frustrations with his family:

“Christ, in the face of my defiance – if my father had only been my mother! And my mother my father! But what a mix-up of the sexes in our house! Who should by rights be advancing on me, retreating – and who should be retreating, advancing! Who should be scolding, collapsing in helplessness, enfeebled totally by a tender heart! And who should be collapsing, instead scolding, correcting, reproving, criticizing, faultfinding without end! Filling the patriarchal vacuum!”

And it is this patriarchal vacuum that brings readers to understand part of the sad crux of this tale: Portnoy perceives himself as “a boy without a father“. On so many different levels, Portnoy desires to “be the one”, to have some defined role which he can embrace and to sink into the security that that knowledge brings with it. Ultimately, it is this that drives this novel, the protagonist’s overwhelming desires to bring meaning to his life and to ‘find himself’ in a way that he has in the past been unable.

“How have I come to be such an enemy and flayer of myself? And so alone! Oh, so alone! Nothing but self! Locked up in me! Yes, I have to ask myself (as the airplane carries me – I believe – away from my tormentor), what has become of my purposes, those decent and worthwhile goals? Home? I have none. Family? No! Things I could own just by snapping my fingers … so why not snap them then, and get on with my life? No, instead of tucking in my children and lying down beside a loyal wife (to whom I am loyal too), I have, on two different evenings, taken to bed with me – coinstantaneously, as they say in the whorehouses – a fat little Italian whore and an illiterate, unbalanced American mannequin.”

There is no doubt in my mind that Roth is a superb writer, a craftsman indeed. And there are so many aspects of this tome that I appreciated. But this book is not everyone’s cup of tea (it is certainly not everyone’s piece of liver, that’s for sure), but if you are not faint-hearted and enjoy a bit of a literary jostle, then go ahead and have a read. Let me know what you think!

In between things, I have read Lavigne’s book Not Me. The premise of this book fascinated me: son tending to father stricken with Alzheimer’s discovers that father might not be the noble holocaust survivor that he believes him to be, that he is in fact a Nazi war criminal. As I said, fascinating! On many levels this novel worked… The relationship between the father and son is fraught with all sorts of guilt and this is neatly amplified by the son’s relationship with his own son and, in fact, his ex-wife. The characters’ relationship with Judaism is also interesting and illustrates some of the complexities faced by second generation survivors. However, the main thrust of this novel is the narrative found hidden in a series of journals supposedly left to the son and written by the father. These journals expose the father as a Nazi war criminal, a cog in the Nazi war machine and as a twisted and at first, immoral human being. However, as the story unfolds, it becomes clear that the author’s message is that humanity in its very nature is a complicated and layered beast, that people can change and that we should never underestimate the bonds of love and the lengths that ordinary people will go to in order to defend and protect those bonds.

However, while this should be a great book, it falls short in many central ways. There are far too many loose strands in this narrative – the relationship between the son and his sister is resolved in a way that by its nature requires further exploration. The son, Mikey, as a character is scatty and loose, somewhat deranged in parts without inspiring any empathy from readers. His own connections to those around him are vague. While this might be an element of his character, it works against him for readers do not feel connected to him, and instead of him bearing some sort of hero stance, he mostly comes across as an irritating idiot.

Am I glad I read this one? Yes. It was a most unusual story and has led me to consider morality and humanity from alternate perspectives. I’d be interested to know what others thing?

For a review and discussion of this text, see the link below. Apart from the fact that the author of this link has spelled the son’s name ‘Mickey’ when my version of the text clearly says ‘Mikey’, it’s a good discussion!